Breaking Down the Myths of Housing, Affordability, and Supply

Breaking Down the Myths of Housing, Affordability, and Supply

By:  Matt Meyers, CEO of Yesler
Yesler CEO Matt Meyers takes a in-depth look at the state of U.S. housing and how we arrived at the current state.

The housing market.  To many, it’s crazy and unknowable.  It always seems in flux and getting more expensive, usually.

The widely accepted narrative is that homes are not affordable, because prices are so high.  But, high prices and affordability are two different things, with the majority of buyers borrowing to purchase their homes.

Can historic data help put our current market circumstances into perspective?  I think so.  Seeing the data will give you a different perspective on the housing market.  For example:

With an open mind and data, you may come to new conclusions about the current state of the US housing market and what the future holds.

Data sources
Most pundits, forecasters and consultants use U.S. Census Bureau or Housing and Urban Development (HUD) data.  In this article, I rely exclusively on The Federal Reserve Bank of St. Louis (FRED) data, which pulls from these government sources.  They provide an excellent interactive site to review all kinds of U.S. data.

Historic housing starts
About 25 years after the GI bill supported veterans in buying a home, their children, the Baby Boomers, were in need of housing.  The year was 1971, and by that time the US was well suited to supply it compared to the rest of the war-impacted cities of Europe and Asia.  The increase in demand from new households for the Boomer class showed up in new home construction.

That begs the question: Has the housing market been underbuilding for 50 years through 7 recessions and widely varied fiscal policy?  Or has demand for new U.S. housing starts been declining for decades?

What has happened to home prices over the same period?

Up, up, and up, with a few dips along the way.  How is this possible over a very log period?

Incomes must have risen too.

Note that this chart starts in the early 80s, not the 70s.  Examining the numbers, it looks like home prices (prior chart) have risen faster than incomes.  That must mean homes have become less affordable.  Unless, there is another factor – interest rates.

The dramatic decline in interest rates created cheap money, for those borrowing on 30-year mortgages.  The recent spike to 6% or slightly higher is still low, from a historical perspective.

One chart that combines the three prior charts.

Here is the narrative: income has risen gently, interest rates have fallen dramatically, and home prices have risen faster than income!

The critical question:
Which has a greater impact on housing prices in the US?

Based on this view of the data, I’d guess B – Interest rates.

What has happened to affordability in the US?
The following chart illustrates the relationship between the three variables of US Median Household Income, US Median Home Price, and interest rates.  The data is the same FRED data downloaded into a spreadsheet to calculate what can a buyer afford (the GREEN LINE) under the following conditions: 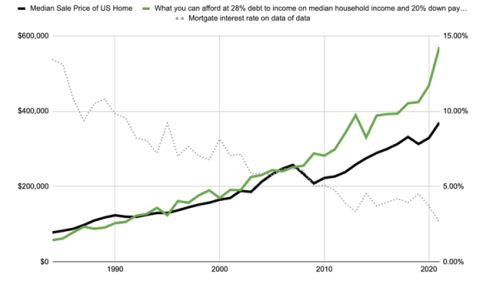 The green line, what a buyer can afford, is higher than the median US home price (black line)!  Prior to 2007, the median sale price of a US home was closely matched to what a buyer could afford.  After 2007, homes became much more affordable due to lower costs of borrowing, even though prices were higher!

What about 2022?
What happens to the green line under the following hypothetical circumstances:

Then home prices relative to buying power become matched again, just like they were from 1985-2006. 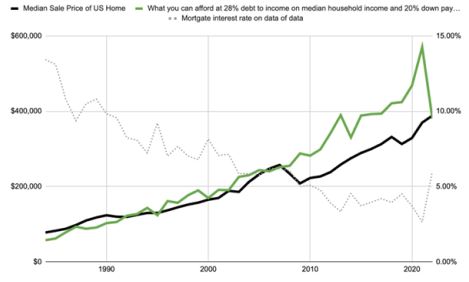 Finally, what about the underlying demand for housing?  Don’t we have a shortage?

History tells us (back up to the first chart for reference) that the demand for housing was about 1.5 million annual housing starts until the 1980s, and since then, it’s been about 1.3 million.  That’s simply taking averages for those periods.  The number of recessions and corrections indicate the market is working!  When there are too few or too many homes, the laws of supply and demand take over to clear the surplus or fill the deficit.

To predict the future, using the past, I suggest demand will stay at about 1.3 million units unless three principal factors that affect new demand change course.

First, the mortality rate.  With the onset of COVID, mortality rates rose, and thus, underlying demand for new housing fell.  We can hope this factor will return to normal.

Second, the rate of births in the country has been declining for several decades, reducing new household formation.  If we have another boom, history tells us it will take 25 years to show up in demand for housing.

CONCLUSION
It’s not demand that has driven prices higher, because underlying demand factors are not in favor of increasing housing starts; rather, it is historically cheap money!  With historically low borrowing costs, more money has flowed into real estate, driving competition and prices higher.

What does the recent dip in US housing starts suggest about the economy?  Go back and look at the first chart in this article and decide for yourself by asking this question: Do recessions (shaded areas) precede or follow peak housing production?  It should be an interesting 2023 for the housing market!

(Matt Meyers is the founder and CEO of Yesler, the Seattle-based lumber and building materials digital marketplace.)